1 / 11
PLEASE NOTE BEFORE VIEWING:
The DoV-Z ROBOTT's origin, aside from "Star Wars" timing, was meant to demonstrate my very personal reaction to the boorishness of most "performance art" of the period (1979 - 1983). These little buggers lent an expensively expansive pliancy to:
(1) reflexive reaction animation possibilities of CURRENT international politics (substantiating how LITTLE time changes events except for the characters).
(2) my conceptual concerns about human-scale relatedness to object familiarities without regionalist narrative extrapolations being necessary. More discussion about the ROBOTT's performances will be found at the variouis Series Description categories.

There will be at least two views of each ROBOTT,
FOUR IMAGES PER WINDOW .... scrolling may be necessary. Some images can be enlarged two times, simply click on the image itself to enlarge.
DoV-Z ROBOTTs 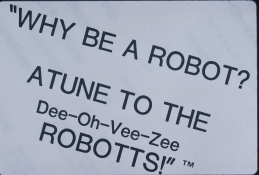 This was used throughout the performance and exhibition history of the DoV-Z ROBOTTs ™ in screen projections, programs, brochures. 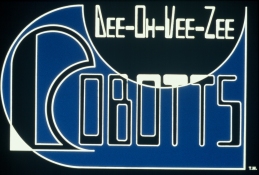 This was a "concurrent" collaboration with Sheridan (Sam/Calvin) Smith. Used in all media, principally on large screens and in fluff promotion materials. NOTE that each ROBOTT ™ represents a specific discipline and would comment about the inherent problems. Collection of the artists.

A sculpture representing Geological Field Analysis holding a report on Food, Mineral, Fuel, and Water degradation/needs of the planet in 1978.
This was the catalyst for building the entire DoV-Z™ family (originally intended to be 32 ROBOTTs™) with the intent to make them at least parabots (radio controlled) commenting on our world-wide labyrithian politics.

JERRY, as a sculpture, is named in tribute to our friend, former Skylab Commander, Astronaut Gerald P. Carr. The simulated disciplines for this ROBOTT™ are that of Oceanography and Climatology
of the planet's Aether anticipating dire global warming conditions.
Private collection 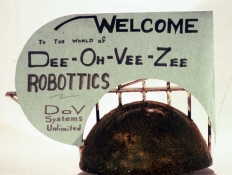 Animatedly introduced the ROBOTTS in the "studio" performances. A Remote operated quadreped. Intentionally mocking hysterical advertising.
*Ukase is the Russian term for government proclamation, having the force of law; to order, to show, an edict, etcetra.

As the first Sonofabott™, In 1981, a start to build an enlargement, approximately four feet high began. Painting and wire sculpture issues took priority. And the expense of producing and maintaining the ROBOTTs™ was an issue.
Collection of the artist

Simulated function: Basic FIELD MAINTENANCE TRAINER for both ROBOTTs™ (to do self repairs) and humans. Early studio performance scripts include emergency repairs.

Obviously the name Drucker is a tribute to the corporate/leadership
training guru, Peter Drucker. Drucker, too, had become disfunctional (thus making for another Sonofabott™) early on as the tank-like drives gave out.

Very active in studio performances on "Super Bowl"
day with a packed house.
Collection of the artist

CUBIE became a Sonofabott™ as a bot handler dropped her during the ROBOTT™ OPERA, 1983©, Jones Hall, University of St Thomas, Houston, damaging the six-ped drives. CUBIE went on to complete her audio performance from a stationary position. Voice by Sally Reynolds, private art dealer, Houston, and author.
Collection of the artist's wife, Dee Dee Bott, Houston. 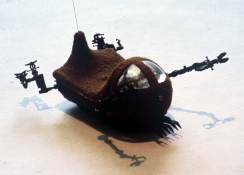 P.E.T.: Precious Extravagant Toy
It participated in a Studio Roller Ball event and the drive trains died, rescued by ROMA (not scripted). 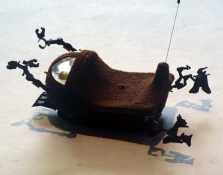 As a Pecious Extravagant Toy, P.E.T., that was provided miniture DoV pillows and its own lined basket by a collector family owning more HJ Bott works than anyone, they were permitted to aquire P.E.T. as a Stayabott pedestal sculpture. The first to leave the fold.
Collection:
Cathy Conlon-Towwnsend & Tommy Townsend, Galveston, TX 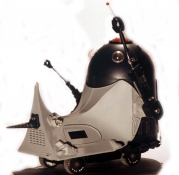 THORMINE was the first rugged performer, working closely with ROMA in studio performances. This pristine appearance lasted but two performances. 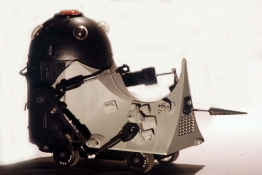 Scriptwise THORMINE would work closely with GARGAN genre ROBOTTs to clean as the mining is done (sort-f-like a clean kitchen). THORMINE would probably function again today if battery corrosion hasn't overtaken all the circuits. 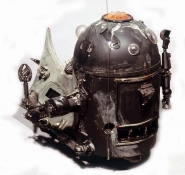 One of my favorites, but was unable to include in the ROBOTT OPERA due to insufficient interactional scale with "newer-larger" ROBOTTs.
Collection of the artist.

Simulated Functions: TOXIC WASTE EXTRACTOR-COMPRESSOR. Generally works with CUBIE and or THORMINE type ROBOTTs. Voice was as intelligible as many Star Wars™
characters were not, GARGAN voice was always critiqued as ruining part of a performance. Too bad, the script was great. The ROBOTT OPERA voice for GARGAN was Ester deVecsey (at the time, Director of Sewall Gallery, Rice University, Houston 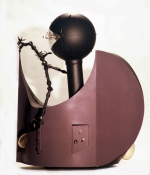 GARGAN's moniker came from the gargling sound she projected as moving about. Likely is now a Stayabott for pedestal viewing. Ironically, the
the circuits were corroded during Tropical Storm Allison's studio flooding.
Collection of the artist 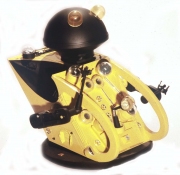 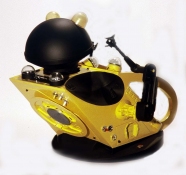 The skirted effect was to simulate a hoover craft (which I experimented but the scale was too vast). The script was loaded with political, environmental and sexual double entendres. The ROBOTT™ OPERA voice was Betty Moody, Moody Gallery, Houston,TX.
Collection of the artist 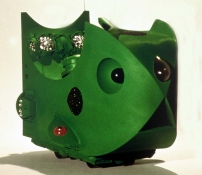 Simulated Functions: A.C.W. there was significant need for many AMPHIBIOUS ARCHEOLOGICAL ANALYSTS, surveying the toxic embedded treasures and coverups of the 20th & 21st centuries.
Quite likely has become a Stayabott™. 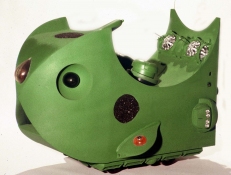 Very self motivated to search for 20th century art ( there was a significant amount of "contemporary" art cast in bronze and works in ceramics lasting A.C.W. 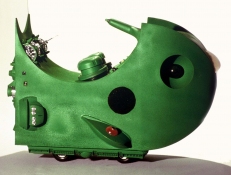 ART-BARF™ became a self anointed 20th century art critic and thus the moniker. He performed for, and was interviewed by five different Houston TV channels, spending n30 minutes on the Green Room. Channel 8. He was also interviewed on TV in New Orleans. 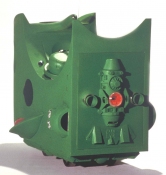 ART-BARF™ was scripted to be the "Don Rickles" of the Houston art scene of the early 1980s.In the ROBOTT™ OPERA, of 1983, ART-BARF would improv-like an attempt to upstage the stars ROWE, the newscaster mimes and Shanabu.
Opera and full time voice: I.M. Knottjahn. Circuits are likely corroded ans He has seen much action.
Collection: Rainey Kundson

Simulated Functions: an INTER-
GALACTIC POLITICAL CONSULTANT (with an Egalitarian Base). Full critically caustic audio relative to the audience being addressed. Spools of red tape were left by NADIR everywhere. A popular favorite in the "studio" performances. 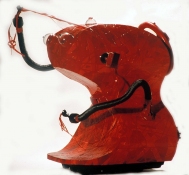 NADIR traveled to 11 museums in the "History of Robotics" exhbition sponsored by the American Crafts Museum. It was physically attacked at three museums, "probably" for the critique of the respective community's political history.

NADIR performed well, with considerable liberal popularity, on at least eight TV stations across the country, four in Houston, including the Green Room on PBS channel 8 and participated in a panel discussion at the Contemporary Museum, New Orleans with ROWE™ partially on TV. 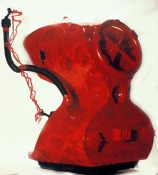 The ROBOTT™ OPERA provided an ample opportunity for NADIR to critique the Reagan/Mormon JUNTA's efforts to privatize much of government. NADIR's voice for the OPERA and some of the TV appearances was David Brauer, Art Historian/Lecturer?Curator, Houston. 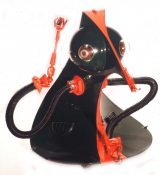 Simulated Function: a HYDROPONIC DENDROLOGIST (a data resource collector and forestry supervisor over humans and drone robots). A very popular ROBOTT because of its hyper kinetic script behavior yet dignified the DoV-Z™ ROBOTTs™ by appearing on a scientific/materials magazine cover. 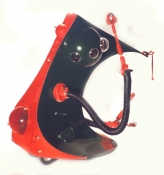 As a dendrologist, its name, REBMIT™, is simply the reverse of "timber"for which its tasks, A.C.W., have been to restore Planet Earth forests and supervise/manage hydroponic forests on the Moon. 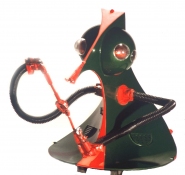 Scripted as a high A-type, condemning what James Watt, Secretary of the Interior, during the Reagan administration had done to forestry, even before the Corporate Wars. REBMIT™ was on three Houston TV channels and with ROWE™ and ART- BARF™ starred in a 30 minute birthday party program on Houston"s PBS and was a star on New Orleans PBS.

REBMIT™ was a self anointed star in the ROBOTT™ OPERA, constantly at odds with the "news-caster" and "Shanabu," the sage of all time. The voice for REBMIT™ during the OPERA
and some studio performances was the late Fred Abrams, collector and private art dealer. 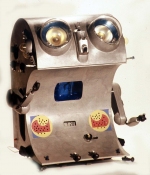 Simulated Function: RADIATION
ANALYST (and became the self proclaimed DoV-Z™ philosopher, working and learning from the old sage, "Shanabu."

When my wife was asked what the ROBOTTs™ look like, she would say,"just like the artist. ROWE™(and Bott, of course)™ was probably the most photographed and spent the most time on TV, across the country, from L.A. to Houston to Birmingham to Mobile with considerable newspaper coverage at all eleven museums in the traveling exhibition and then at the New Orleans, Electronic Visions panel discussions and performance. 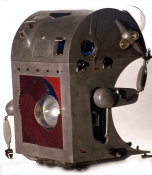 ROWE™ was the conduit script influence for the ROBOTTs™ during the OPERA and most studio performances.The OPERA voice was that of Clint Willour, prominant Texas curator, collector and the visual arts bon vivant of Houston.

Please note the basic DoV@ System Concepts format is the back "door" of ROWE™ with the colors of radiation warning. On the front side notice the "new" radiation warning label A.C.W.
Obviously the materials for ROWE™, and most other ROBOTTs are pecious metals or ceramic; e.g.,ROWE™ is platinum, REBMIT is bronze and platinum.It is possible that not all circuits were ruined in Tropical Storm
Allison.
Collection of the artist

Simulated Function: CATASTROPHIC EVENT TRIAGE SUPERVISOR; Serves on the Intergalactic and Ether Catastrophe Advisory Boards. EGAIRT™ is highly critical of the lack of preparedness for all all catastrophes prior to the Corporate Wars. Favorite script line, "I do NOT deal in patient
plea-bargaining."

As a Triage officer, its name became the reverse to give it more
gravitas, EGAIRT™, principally because the selection process is based upon what "worth" the individual provides to the restructuring of homo sapiens in the galaxy. EGAIRT™ is always at odds with ROWE™ and "Shanabu." In the ROBOTT™ OPERA the voice was provided by Virgil Wall,Jr. collector, Houston/Clear Lake, TX
Collection of the artist
1 / 11
Loading...